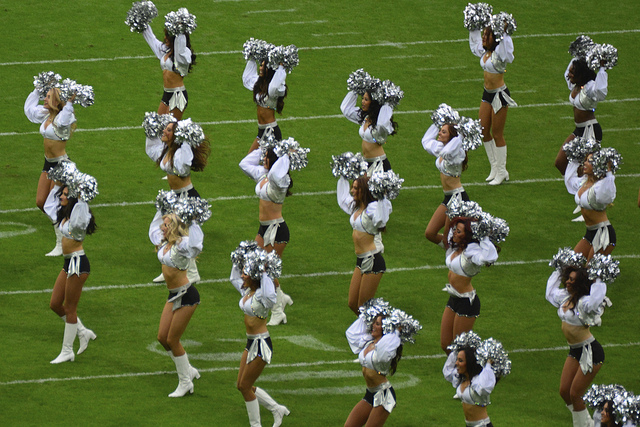 Thanks to the Oakland Raiderettes, every pro cheerleader in California now has employee status. (Photo by Pete Sheffield)

A few weeks ago, we discussed the difference between employees and contractors––and why it’s important for business owners to know the difference. Governor Jerry Brown of California agrees. Yesterday, he approved legislation recognizing California’s professional cheerleaders as employees who are entitled to minimum wage and overtime.

The new law requires California sports teams to treat pro cheerleaders as employees instead of contractors and provide them with sick leave and overtime pay, as well as the standard labor protections that apply to other team employees.

For now, the law only applies to California cheerleaders, but a similar law is pending in New York.

The California bill came as the result of a wage-theft lawsuit filed by the Oakland Raiderettes, who were paid less than $5 per hour (California minimum wage is $9 per hour). The Raiderettes’ contracts did not compensate them for the time they spent rehearsing or making public appearances. And they weren’t reimbursed for travel and other expenses.

So let’s put it to the IRS test:

In addition to the Raiderettes, pro cheer squads affiliated with at least nine other teams in the Golden State are kicking extra high today:

The NFL has kept its distance from the controversy, saying that it doesn’t manage cheerleaders’ employment.

We’ve said it before and we’ll say it again: be sure you know if your workers are employees or contractors. Getting it wrong is expensive.