Tax season can be stressful for any individual or business owner. Unless you’re an expert, the guidelines feel complicated and vague, and the repercussions can get expensive and detrimental. This alone can leave the most confident entrepreneurs paralyzed by uncertainty, but it gets even more complex if your business is involved in any relationships or activities overseas.

“Overseas" can apply to any foreign country, even if it's not over a sea or ocean. Failing to take proper tax filing precautions for all your foreign financial activities could land you or your affiliates in hot water. How hot? Upwards of $25,000-per-error hot.

Here’s what you can do: Be proactive in identifying your tax filing responsibilities and timelines to avoid an uncomfortable conversation with the IRS (Internal Revenue Service) and other scary branches of the U.S. government such as the SEC.

What You Need to Know About  Foreign Business Tax Filing

The IRS’s job is to track the revenue and spending patterns of individuals and companies across the country. Many businesses have international dealings that could potentially leave funds unaccounted for—which companies have been known to do intentionally. So the IRS puts extra emphasis on documenting foreign transactions and is quick to penalize anyone for finagling their numbers. Based on the various types of foreign activities, here are the filing actions your business should take to stay in compliance:

Filing With a Foreign Subsidiary:

A U.S. company files form 5471 if it owns a foreign corporation and form 8865 if it owns a foreign partnership. However, the IRS has different rules for defining foreign entities and typically classifies foreign companies as corporations regardless of how they are identified in their own countries. Because of this, it’s more common for U.S. companies to file a 5471 than an 8865.

You can use form 8832 to classify a foreign entity as a partnership. This form also includes a list of foreign entity types the U.S. automatically classifies as corporations for all federal tax purposes by country. 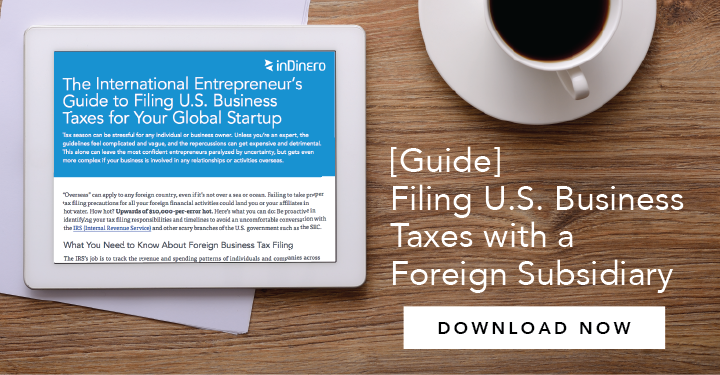 Filing With a Foreign Shareholder:

Any foreign shareholder who owns more than 25% of a U.S. business entity is required to file form 5472. This includes anyone who is not a U.S. citizen or resident–which is its own gray area. While it’s pretty easy to tell if you qualify as a U.S. citizen, the IRS has a few tests to determine whether you are a U.S. resident, including physical presence on U.S. soil, or marital status.

If you or one of your company’s shareholders are foreign but have spent a large amount of time stateside, it’s worth seeing if you qualify for U.S. residency under either test and can file as an immigrant instead of as a foreign shareholder. And the sooner you know the better.

Filing late or failing to file a correct or complete a 5472 for each qualifying foreign shareholder along with your company’s income tax return can amount to a monetary penalty of at least $25,000 per required shareholder per period.

Psst! This penalty was once only a mere $10,000 per shareholder, per period, but was recently increased. Learn more: It’s Now 250% More Expensive to File Taxes Late If You Have Foreign Shareholders

Also, if the IRS finds you have purposefully omitted information or violated the filing requirement, you may face criminal charges. 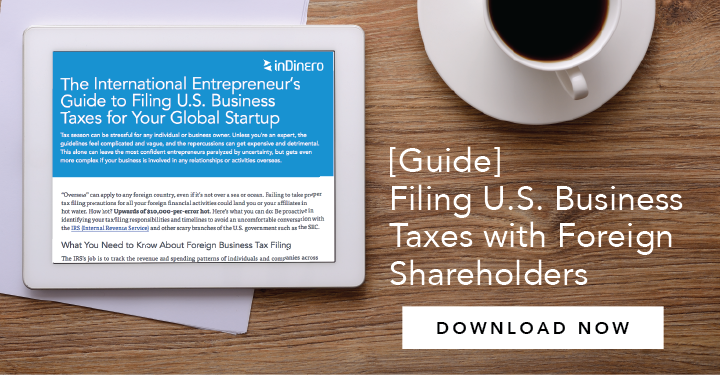 It’s common for individuals and companies to have financial accounts including a bank accounts, brokerage accounts, mutual funds, trusts, and more. If you or your company has financial interest or signature authority over foreign accounts that total $10,000 or more, you are responsible for filing a FinCEN form 114, also known as a Report of Foreign Bank and Financial Accounts (FBAR).

This applies to any financial account outside of the U.S. where either:

This may seem pretty straightforward—if you or your business has access to a foreign financial account, it’s likely you’ll need to file FBAR. But what triggers most FBAR filing obligations can come as a surprise to many U.S. companies. If your company owns or controls any foreign subsidiaries it’s reasonable to assume they have their own foreign financial account. As the U.S. parent company, you have financial interest in your foreign subsidiary. This makes you responsible for reporting this company’s financial account information to the IRS and the U.S. Department of Treasury.

There is no extension option for FBAR. You can file electronically on the Department of the Treasury’s website either as a U.S. individual or entity no later than June 30 of the following calendar year. 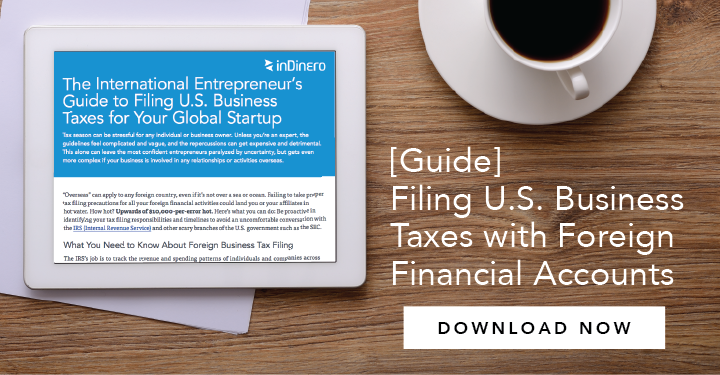 If you have missed a required filing, DON’T PANIC!

You may be able to use a first time abatement waiver or other disclosure program to help dodge a potential penalty. Your first step in appealing to the IRS’s sympathetic side is to have a good accountant and a great tax specialist who understand your business and foreign relationships going into tax season.

Now that you have a good start on identifying your foreign tax responsibilities, take a look at some more ways to prepare your business for the upcoming tax season. Our end-of-year tax pack has resources busy business owners like you can use to meet your biggest tax season objectives: getting books organized, meeting deadlines, and lowering taxable income.

Related Article:
inDinero has worked with many businesses that have foreign accounts, owners/shareholders, or subsidiaries. See how inDinero a helped Canadian company, Sendwithus, handle their U.S. business taxes so they could expand to California and join Y-Combinator’s accelerator program.